These teams compete in the Northern California Junior Lacrosse Association, playing 12v12 lacrosse (11 field players and one goalie) on a full size field.

The top priority for this team is to develop individual and team skills.  Games are competitive but playing time is not solely determined by player ability.   During the season, players are expected to prioritize lacrosse over other sports that they may be involved in.

Twice weekly mandatory practices typically start in mid January or early February.  Games start in late February or early March, and are usually played on Saturdays.  Some games are on Sundays.  The season ends in mid-May.  There are usually no games during Spring Break (EUSD schools).

Some away games may be held in the Bay Area, typically East Bay or North-East Bay teams (Pleasanton, Napa, Walnut Creek, etc.) but more away games are in the local area.

Girls’ lacrosse players use the following equipment. This equipment is not provided by the club. Players are required to have it at their first practice. Players who participated in the New Player Clinic, may already have received a stick. 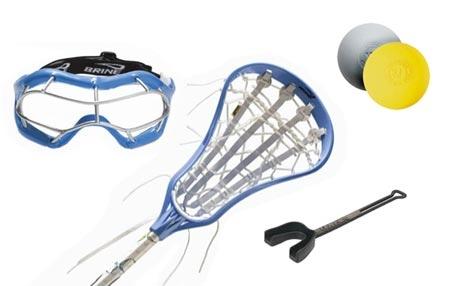 One goalie per team will wear team-supplied helmet and padding - and players usually have fun rotating and taking a turn in goal.

Players will purchase their own GBYL Uniform Set through an approved supplier after team placement.  Players will be able to choose a number based on availability as well as conformance to our Club Number Policy.  Number requests are submitted after team placement. The club policy is that all uniforms must maintain their original high quality appearance.  If they do not, a new uniform purchase will be required.  Returning players may purchase a new uniform set or individual components.

Team evaluations are held in November to determine player placement. In some cases teams are created based on player age grouping, experience, skill level, friend participation, and team availability.  Our league, the Northern California Junior Lacrosse Association (NCJLA) requires teams to register as a "Rookie - B" a "Veteran - B" or an "A" team.

Some seasons, B teams will be selected on the basis of age - with the "Rookie" team being comprised of predominately first year players in that age grouping (i.e. first year 12U players, first year 14U players) and the "Veteran" team being comprised of predominately second year 12U and 14U players. In this case, team assignment is not based on player skill or experience, but age. This is commonly done when the registrants are evenly split between "first year" and "second year" players - and substantially the entire team is returning and wishing to play with friends and former teammates.

Other seasons, B teams will be selected on the basis of skill - and the age grouping will hold involve a competitive tryout to place the more skilled players on the "Veteran" team.

On some seasons, an “A” team will be formed when there are a sufficient number of skilled players to form an "A" team. A competitive tryout to place the more skilled players on the "A" team. “A” teams typically travel more, have more rigorous schedules, and may have a longer season.

In mid fall, coaches and program leaders will determine the team designations, and registrants will be notified when the season tryout schedule is set in early November.

The bottom line: the team designation varies from season to season and depends on the specific circumstances of that season, with the objective of doing what is in the best interest of the largest number of players.

Lastly, no team designation is required for any level of play at Granite Bay High School. All players desiring to play lacrosse in high school are encouraged to try out will be evaluated at that time without regard to any prior youth team designation.

The registration fee for the 2023 Spring 12U/14U season is $330. If you have any difficulty with the registration cost, please contact us by clicking HERE.

Uniform are purchased after team placement. Approximate cost is $60.  Priority on uniform numbers is given to those who have played longest. In the event there are two players who have played the same length of time, priortiy will be given to the player who registered earliest that season.

Players are required to have membership with US Lacrosse.

Please check the age eligibility page prior to beginning the online registration.